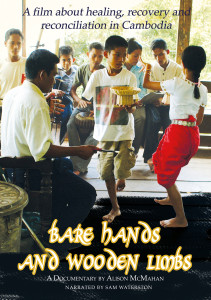 “This documentary is a shocking, consciousness-raising, eyes-opening movie…. Everyone should see this film for it is touching, beautiful form….” – Monika Grzywnowicz/Feminist Review

A film by Alison McMahon / Narrated by Sam Waterston

In 1974 former Khmer Rouge commander Touj Soeurly and the fourteen year old Chhem Sip were deadly enemies. Sip was imprisoned, tortured, and just barely managed to escape with his life to the US. Soeurly lost his leg in battle.

Now these two former enemies are working together to make possible the community of Veal Thom, a cooperative village composed primarily of disabled veterans, from both sides of the war, and their families.

The film is a testament to what an impossible friendship and cooperation between a former Khmer Rouge commander and a former Khmer Rouge victim can accomplish. Cambodia is one of the poorest countries in the world. The scars of two decades of civil war can still be seen and felt on the Cambodian economy, culture and social order, especially in rural areas.

Around the world, landmines claim 26,000 new victims a year – that’s 71 people every day. Already over a quarter of a million people have fallen victim to the more than 100 million landmines in 64 countries. This number that continues to grow. These landmines are installed during wartime, but usually attack their victims years later, after the conflict they were set for is long over.

Nowhere is this truer than in Cambodia, where 35 percent more land could be cultivated if it weren’t polluted with landmines. Victims from landmines often die and leave behind their dependents. Those who survive are disabled, a condition that guarantees a lifetime of ostracism and extreme impoverishment in a country where half the population already lives below the poverty level.

Most amputees end up as beggars, but hundreds of them, along with their families, have rejected this path and banded together in the village of Veal Thom, 60 miles NW of Phnom Penh.

This is their story.

“Land mines are the perfect soldiers: they never sleep, and they never die. However, they also don’t know which side they’re on, or when the war is over.” – Touj Souerly, Chief of Veal Thom, landmine survivor

Public Performance and Digital Site Licenses are available through Soundview Media Partners. To inquire or to place an order, write to info@soundviewmediapartners.com or choose from the options below.