Beyond Elections: Redefining Democracy In The Americas 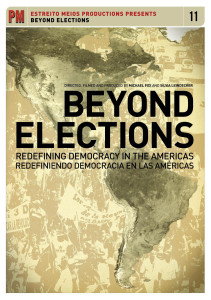 From Venezuela’s Communal Councils, to Brazil’s Participatory Budgeting; from Constitutional Assemblies to grassroots movements, recuperated factories and cooperatives across the hemisphere, Beyond Elections is an exploratory and investigative journey across the Americas that attempts to answer one of the most important questions of our time: What is Democracy?

The empowering film gives hopeful and concrete examples from around the Americas of people taking back the reigns of power and governing their own communities. Beyond Elections is a road map for social change, drawing from communal councils in Venezuela and social movements in Bolivia to participatory budgeting in Brazil and worker cooperatives in Argentina.

The film gracefully succeeds in demonstrating that these grassroots examples of people’s power can be applied anywhere. Particularly as activists in the U.S. face the challenges of the Obama administration and the ongoing economic crisis, this timely documentary shows that a political revolution can start today right in your own living room or neighborhood.

Beyond Elections examines labor democracy. Borrowing footage from The Take (2004), Naomi Klein and Avi Lewis’s film about an Argentine work cooperative, it documents factories taken over by workers, who not only share the work of managing the factory but also the profits. “We’ve formed a democratic business,” says José Abellí, a leader in the recuperated factory movement in Argentina, “a business of people, not capital.”

Beyond Elections plunges into the rowdy realm of popular democracy, where opinions clash and people take the idea of consensus so seriously that they are willing to engage in long, painstaking meetings. The filmmakers omit no opinions from the debates they cover, taking the time to show participants explaining the projects under discussion,

Comparisons with U.S. notions of democracy are inevitable. Without describing the U.S. political system in detail as a point of comparison, the film will nonetheless come across as a critique of it. Electoral democracy, so triumphantly glorified and even promoted abroad, is not only insufficient but also a betrayal of democracy “in the name of democracy,” as Uruguayan writer Eduardo Galeano says in the film. Indeed, the United States has created a monopoly on the definition of democracy, says Portuguese sociologist Boaventura de Sousa Santos. “But in reality,” he says, “democracy is a work in progress.”

“Offers a strong critical reflection on democracy in the Americas contemplating its past, present and future through the voices of those most affected by its current limitations, inequalities and injustices.” – Acedemia.edu by Richard Van Heertum, CUNY College at Staten Island

“…proves that democracy can and should be more than casting a ballot every four years.” – Blending the Lines

Directed, filmed and produced by Michael Fox and Sylvia Leindecker.

104 minutes on 1 disc (English, Spanish and Portuguese with English and Spanish subtitles)