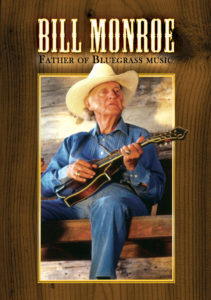 Sometimes when a film is made it is so definitive that no one ever attempts to touch the subject matter again. This is the case with Bill Monroe: Father of Bluegrass Music.

No single figure in American music so dominated a genre as did Bill Monroe with bluegrass.

“Bluegrass fans, get ready to pounce! The film truly soars with concert footage and vintage phonograph recordings of Monroe steaming through his musical canon.” – Film Threat

The film features archival footage and rare 1990s performances from Monroe’s final years including many of the greatest songs from his six decades of recording. Included are “Uncle Pen” and “Muleskinner Blues.” In addition, the film offers unparalleled access to Bill Monroe telling his story in his own words. Other interview subjects include the Grateful Dead’s Jerry Garcia and country music legend Roy Acuff, in one of his final film appearances.

“After watching Bill Monroe: Father of Bluegrass Music, it will become clear that almost everyone who came after Bill Monroe—regardless of genre—was influenced by, and owes a debt to, the man with the mandolin and the ever-present hat. Bill Monroe:

Father of Bluegrass Music is a magnificent representation of just exactly how important Bill Monroe truly is to multiple generations of musicians (as well as non-musicians!). Monroe put it this way, “Bluegrass music is like going to school. When you learn Bluegrass, you can play a lot of music.” – Pop Matters

“…offers unparalleled access to Bill Monroe, following him from the backstage of the Grand Ole Opry to his farm outside Nashville and on the road in his legendary Blue Grass Express tour bus.” – Folk Streams

Bill Monroe: Father of Bluegrass Music stands alone as the most intimate and detailed portrait of this unique musical innovator.