Black and Gold: The Story of the Almighty Latin King and Queen Nation 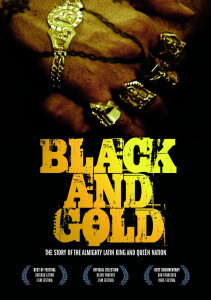 “Can a street gang transform itself into a community service organization? Black and Gold looks at the history of the Latin Kings organization, as well as their dramatic transformation and the political and philosophical motives behind their actions.” – New York Times

In 1994, the Latin Kings–the largest and most powerful street gang in New York–became the Latin King and Queen Nation. They claimed to have abandoned their criminal past and to be following in the footsteps of the Black Panthers and the Young Lords.

With over 3,000 members in New York, some saw the Latin King and Queen Nation as the most important political voice to rise from the streets in decades. The NYPD did not agree, calling them a vicious gang with a PR campaign. One thing is certain, the City was never the same after the Nation went downtown.

In 1997, Big Noise films became the only media group ever given unrestricted access to the Nation. For two years they ran with the Kings and Queens in New York City, filming on the front lines of their everyday struggle for survival. Black and Gold explores a reality that is too often reduced to a stereotype or a slogan. Its unblinking lens puts you at the center of a complex and controversial movement.

The Nation was one of the major forces that made police violence and the prison system political issues in New York City. But from the beginning the NYPD has questioned the sincerity of the Nation’s political involvement, and has systematically worked to dismantle what they see as the most dangerous street gang in the City. Their efforts culminated in a spectacular midnight raid on May 15, 1998 when over 1,000 Federal and City agents simultaneously raided homes across the city making over 100 arrests in what was the largest coordinated FBI action since prohibition.

Black and Gold lets you feel the tension inside the movement as it comes under fire from midnight police raids and assassination attempts. In the end it shows us both the black and the gold—both the fear and violence of the street and the fierce love inside the most dangerous movement in the City.  Extras include full length interviews with King Tone and Puerto Rican revolutionary Richie Perez.

“Black and Gold offers a potent portrait of bootstraps idealism in an embattled community. . . this energetically packaged documentary deserves to be seen.” —Dennis Harvey, Variety