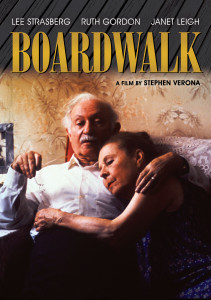 “I left one country; I’m not about to leave another. This is where I choose to live and nobody, but nobody is going to make me leave”… This declaration by Rosen is at the heart of the film Boardwalk which due to circumstances was lost in the business of Hollywood for some thirty years.

Married for 50 years, David (Lee Strasberg) and Becky (Ruth Gordon) Rosen have lived in Coney Island for most of their life together. But the area is not what it used to be, and their children ask them to move. David states, “I left one country, I’m not about to leave another.” But Becky becomes ill and David’s cafeteria and synagogue are vandalized by thugs. David must make his final stance.

Boardwalk was filmed on location at numerous spots in New York city, including the famous but now defunct Dubrow’s Cafeteria.

Boardwalk “is about a number of serious subjects, including old age, urban blight, the generation gap, terminal illness, inflation and the failure of the American dream” – Vincent Canby, NY Times

“The Rosens have made Brooklyn, and more specifically Coney Island, their home for close to 50 years, but the times, they are a-changin’, and not necessarily for the better. A gang led by the ominously named Strut (Kim Delgado) has moved in and is terrifying local residents and business owners (one of whom is David). Add to this health issues and family dysfunctions (including some concerning their daughter, played by Janet Leigh)” – Bluray.com