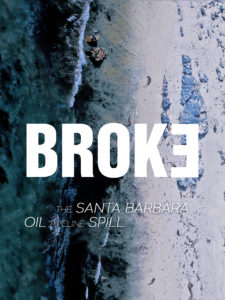 New documentary about the Santa Barbara Oil Pipeline Spill of 2015.

On May 19, 2015, Plains All-American Pipeline’s onshore pipeline ruptured spilling 140,000 US gallons onto the Gaviota coastline. Oil flowed through a culvert and into the Pacific fouling beaches from Santa Barbara to Los Angeles. Gail Osherenko’s “Broke” follows the story of the spill, the clean up, and the active community responses.

“Broke” highlights the reaction of citizens who came together in protest marches and healing ceremonies, rescued birds and marine mammals, cleaned the oil off  beaches, and demanded more stringent spill prevention and response. The community’s actions stand in stark contrast to the insensitivity of the oil industry and particularly Plains All-American Pipeline, Ltd.  Plains still faces both criminal and civil lawsuits.

We started filming at Refugio State Park the afternoon that Plains All-American Pipeline, line 901, burst on May 19, 2015 spilling 140,000 gallons of crude oil onto the Gaviota coast and into the ocean. Crude oil tumbled in the surf, sent toxic fumes in the air, and killed sea life as the Coast Guard struggled to respond.

It’s a one-hour environmental story with a peek back at the Santa Barbara oil spill of 1969 that helped launch the environmental movement, EPA, and clean air and water laws, and a look forward to a fossil free future. 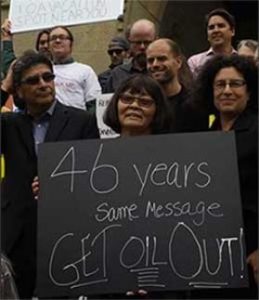 Featured in the film in alphabetical order are: