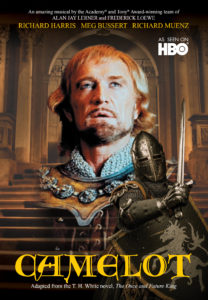 The Broadway version of the Lerner & Loewe classic starring Richard Harris, Meg Bussert, Richard Muenz. Adapted from the T.H. White novel “The Once and Future King”.

Camelot is a utopia where good King Arthur, his wife Guinevere and The Knights of the Roundtable live virtuous lives until Guinevere develops a powerful attachment to a French soldier, Lancelot. Their love for Arthur and for each other serves to disrupt peace in the kingdom. Lancelot falls madly in love with the queen while Arthur is entrapped by an evil spell cast by Sorceress Morgan le Fay at the urging of the king’s illegitimate son, Mordred.

When their affair is revealed, Lancelot fights his way out of Camelot, leaving Guinevere who is sentenced to die by fire. When Arthur returns from his enchanted imprisonment, he must decide whether to watch her suffer a painful death or incite a civil war.

This production was originally part of the cable series “HBO Theatre”, and is a videotaped presentation of the Broadway stage revival of the Lerner & Lowe musical. The production was filmed at the Winter Garden Theater in Manhattan, NY and received four ACE nominations.

Recommended for family viewing by the National Education Association. 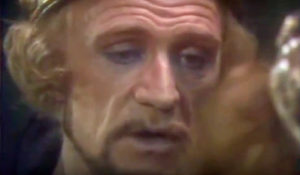 The music from Camelot is of course some of the most memorable in theater history. This production included the following tracks/performances:

– Overture
– The March (Parade)
– I Wonder What the King Is Doing Tonight
– The Simple Joys of Maidenhood
– Camelot- Arthur
– Camelot (reprise)
– Follow Me
– C’est Moi
– The Lusty Month of May
– Then You May Take Me to the Fair
– How To Handle A Woman
– The Joust
– Before I Gaze At You Again
– If Ever I Would Leave You
– The Seven Deadly Virtues
– What Do the Simple Folk Do’
– Fie On Goodness!
– I Loved You Once In Silence
– Guinevere
– Camelot (repirse)

“Enjoy Camelot for what it is, have the songs stuck in your head for days… Relive a night on the town that you may not even have been alive for. Highly Recommended.” – DVD Talk

Note that the transfer of this film is SD as originally provided by HBO at 720 x 480. No video enhancements have been applied. Audio has been sweetened.