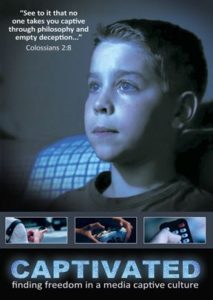 Are we connected or have we disconnected?

Statistics show that the average screen time for an American child is approx. 53 hours per week. Everywhere we go, we are surrounded by screens.

Have we entered a techno utopia or a virtual prison?

Most would agree that we are a media-saturated society, but what effect is all this media having on us individually and culturally? People of all ages are reporting that their unchecked media consumption has led to disconnection, discontentment, and captivity.

Captivated features insights from media experts as well as personal stories from individuals and families who have escaped media addiction and learned to make discerning choices about their use of media technology.

This feature-length documentary is not anti-media or anti-technology, but it raises critical concerns about our culture’s seemingly unchecked enthusiasm for media consumption. It highlights the overwhelming evidence of growing problems on multiple fronts, including the potential physical, psychological, moral, and spiritual impacts of media technology when used or consumed without discretion.

“This Christian-based documentary makes a handful of compelling nondenominational points, while exploring topics such as the contemporary condition of being wired—sometimes 24/7—to the Internet and other types of media. The irony of using video to make a case against media is not lost on the viewer; in fact, it only enriches the debate that is sure to be sparked by this powerful and timely documentary. Recommended.” – Video Librarian

DVD includes Over Two Hours of Extras (Extended Interviews, A Word from the Producer, more)