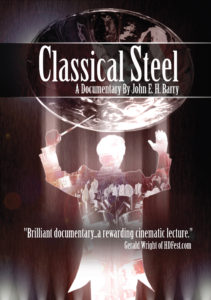 Classical Steel is an award winning, educational documentary featuring steelbands taking on the role of symphony orchestra and faithfully reproducing the works of the classical masters.

Chronicling its roots from the Caribbean nation of Trinidad and Tobago, the film showcases pan players and steel orchestras from different parts of the world, and calls to attention the growth of the steelband movement.

The film includes examples of 12 -25 piece pan “orchestras” (with no other instruments involved) playing Bach and Rossini among others. Most interesting is that the classical pieces played are without the use of sheet music. Most of the players cannot read music, and there is an apparent controversy as to whether training a pan musician without teaching them to read music first is a good thing.

“From its origin instrument, the steel drum, which was inspired in the early 1960’s, to the present day of playing classical music on the contemporary global stage gives the viewer a rewarding cinematic lecture.” — Gerald Wright, HDfest.com

“Playing classical music on the steelpan showed Trinidad society that a percussion instrument invented in the poorer areas of Port of Spain could reach the heights of a symphony orchestra. The film looks at the importance of classical music in the development of the steelband and its acceptance worldwide as a legitimate instrument.” – TTFilmFestival

The film secured festival play inclusive of the following:

The bonuses on the DVD include :
4 extended interviews (totaling 25 minutes)
1 Additional interview (just 33 seconds) and a “Performance” by a soprano singing a aria from Carmen (4 minutes).