Contradictions of Fair Hope, The 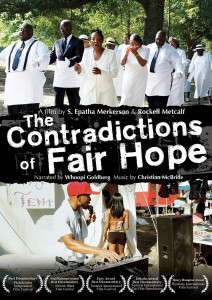 This multi-award winning documentary examines a little known aspect of American history, when newly freed slaves throughout the South formed “benevolent societies” to respond to abject hunger, illness and the fear of a pauper’s grave.

The film sets the stage in rural Alabama, prior to Emancipation, and traces the development, struggles, contributions and gradual loss of tradition of one of the last remaining African American benevolent societies, known as “The Fair Hope Benevolent Society.”

Providing an unprecedented look at the complex and morally ambiguous world of Fair Hope juxtaposed against the worldly pleasures of what has become known as the annual “Foot Wash” celebration, the film contrasts deity and the devil, preaching and prostitution, gospel and guns, devotion and drugs, heaven and hell…

“Whoopi Goldberg lends her voice as narrator of this documentary, which has already taken home 17 awards” – WGBH

“…looks at twists in the evolution of Alabama’s Fair Hope Benevolent Society” – NJ.com