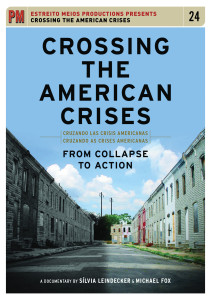 On September 15, 2008, the United States fell into the worst financial crisis since the Great Depression. The same day, a filmmaker and his crew set out on a trip across the country to ask the American people what they had to say about it. In 2010, they went back to see how things had changed. The financial forecasters say the recession is over, but the reality is otherwise.

These stories reveal desperation, indignation, hope, dreams and a disastrous economic breakdown; chaos generated by a system of inequality. But the financial meltdown is just one of several human rights crises now shaking the United States—in housing, education, health care, etc. The solutions to “Crossing the American Crises” are in the hands of the people.

“The film is magisterial in the diversity of perspectives it represents, giving voice to women and men of different ages, ethnicities, and geographic regions.” – Benjamin Junge, Dept. of Anthropology / SUNY-New Paltz

“This film drives home the real impact of the financial crisis on the lives of people across the U.S. and through their stories shows the way forward for progressive politics.” – Betsy Hartmann, Director, Population and Development Program, Hampshire College