Dark Side of the Full Moon 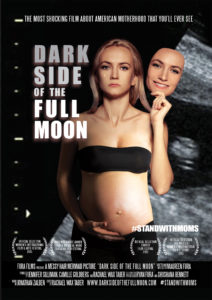 Having a baby is supposed to be the happiest time of one’s life. But what if it’s not and no one is helping?

1 in 7 women suffer from perinatal mood and anxiety disorders. 1 in 1000 will get postpartum psychosis. Affected are 1.3 million mothers annually and the system is failing them.

Dark Side of the Full Moon delves into the unseen world of maternal mental health in the U.S and investigates the disconnect within the medical community to effectively screen, refer, and treat the 1.3 million mothers affected each year, giving a face and voice to the countless women who have suffered in silence.

In Dark Side of the Full Moon, two mothers take on the American healthcare system when new motherhood crashes into mental illness.

Maureen, a mother of two, found herself in the world of a newly inducted mad woman the moment she conceived her son. Desperate to put a name to what happened to her and find out why she went untreated for so long, she finds Jennifer, another mom, fighting a one-woman campaign to bring maternal mental health services to women in five Southern States and who also suffered from the same debilitating disorder when she was pregnant.

The film highlights inconsistencies of care, questioning the system and doctors as well as ourselves, asking who should be held accountable for the staggering number of women still suffering in silence, facing barriers to treatment, where professionals and the general public’s lack of knowledge when mixed with fear can create fatal consequences.

Maureen and Jennifer uncover the history, the origins, and mythology surrounding the dark side of motherhood, and will attempt to reconstruct the idea of “motherhood”, while forging a way to find the best system of care for women to find the help they need with ease, without shame, and a quick recovery.

“Did they find the answers they were seeking? Is change really possible? Is there a best system of care? Will there be a day when women no longer have to face this and would they choose to go through this again?”

The release of the film has been covered by NBC News, Bipolar Mom Life, The Miami Herald, Inside Out, Stigmama, The Monterey Herald, Postpartum Support International and many more organizations throughout N. America.