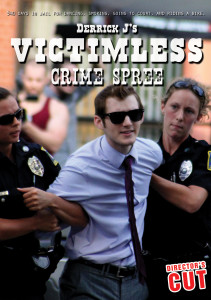 “The people who are crazy enough to think they can change the world, are the ones who do.” That statement describes Derrick J and most of the people in Derrick J’s Victimless Crime Spree.” – Free Press Publications

Derrick J, a liberty activist from Philadelphia, makes the move to the epicenter of libertarian civil disobedience: Keene, NH. “Derrick J’s Victimless Crime Spree” documents his first year of activism which includes five outrageous arrests, all caught on video. His crimes for which he was sentenced to 540 days in jail? Recording video, dancing, smoking cannabis, going to court, and riding a bike. This moving and amusing story is narrated by Derrick J himself and includes plenty of exciting activist footage that makes it clear who the real criminals are – the people calling themselves “government”.