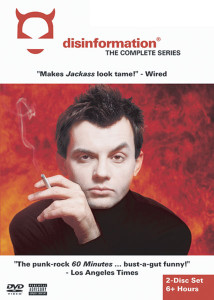 How far do you have to go to go too far for television? Disinformation found out when it aired its own TV series, hosted by Disinfo co-founder Richard Metzger, on the UK’s Channel 4 TV network, challenging the network’s censors and resulting in Channel 4 refusing to air certain segments. The first season was bizarrely scheduled after Ally McBeal and surely messed with the heads of more than a few fans of that show–evidently the network didn’t quite realize what they had paid for. An instant classic of the weird and unusual, the series was a hit (and was bought, but never aired, by the Sci-Fi Channel in the United States).

Watch one 3 minute clip on Satanism