Far from big cities and the attention of mainstream media, the odds are against defeating a formidable foe. 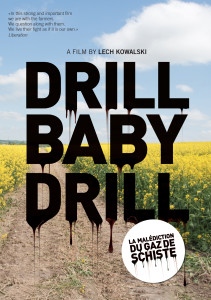 In the ecologically pristine area known as the Lungs of Poland, inhabitants discover that Chevron, the fourth largest energy company in the world, plans to build a shale gas well in their village. The Polish authorities along with Chevron hope to hit the shale gas jackpot.

At first the villagers are in favor of the project but after further research they learn that having a well near their homes and farms may not be such a good idea.

Drill Baby Drill weaves their action to block construction of the well with the problems related to shale gas mining taking place, far away in the United States.

It may be too late to stop the energy companies in Pennsylvania – “the Saudi Arabia of shale gas mining” – but the villagers may still be able to stop Chevron. Far from big cities and the attention of mainstream media, the odds are against defeating the formidable foe. But with fortitude and good strategy, the people in the village hope that the little guy has a voice loud enough to be heard.

3 Stars! “Kowalski’s film certainly suggests that fracking inevitably leads to catastrophic environmental impacts, but its story is more about the admirable and unforgettable passion of the Polish and Pennsylvanian residents who try to stop what they see as destructive and dangerous. Recommended” – Video Librarian