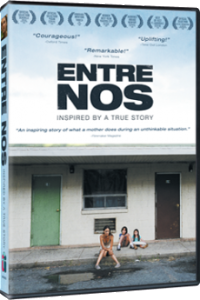 Entre Nos tells the true story of a woman’s struggle to survive in New York City with her two children after being abandoned by her husband.

The main character, Mariana, totes her two children from the country and culture of Colombia to reunite with her husband in Queens, New York. Her life is devastatingly turned around when her husband abandons the family.

As a result, Mariana must struggle with unemployment, eviction letters, eviction notice forms, how to speak fluent English, and then experiences the early signs of pregnancy.

With no where to go Mariana is under extreme stress due to her misfortunes. She and her kids have to now survive living in a foreign country. As Mariana desperately searches for jobs in NYC, the story weaves along with the stress she lives with. In the end, Mariana resourcefully navigates a surprising way to make some money by using recycle containers to recycle for cash.

English and Spanish with English Sub-titles