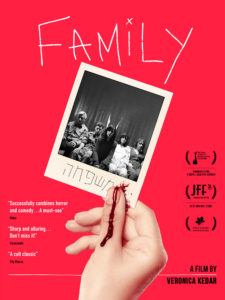 It all begins on one night, when Lily arrives at her therapist’s house asking for an emergency session. She wants to explain why she’s killed her family.

Home is where the hurt is. In a perfect world, Lily would have grown up with a loving father, a caring mother, a sane sister and a brother who wasn’t madly in love with her. Instead, Lily finds herself in the living room, staring at four dead bodies. Gone to confess to her therapist, she’s met with her therapist’s insensitive teenage daughter, with whom she gets locked in a battle of wills.

“Kedar wonderfully shares the nuances of family trauma and dysfunction and she does so viscerally and beautifully. But this is also a look at a fractured family that is upsetting and quite jarring. The film is “nominated for three Israeli Academy Awards.” – Amos Lassen

With 5 international wins and 15 nominations, Family can certainly be referred to as critically acclaimed. Below is a sampling from the extensive list:

“Family follows a structure that feels almost like a session of therapy, which is a great idea for this dark, deep character study.” – Bloody Disgusting

“Successfully combines horror and comedy. A MUST see” – Mako