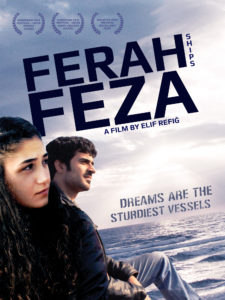 Dreams are the sturdiest vessels for twenty-somethings Ali and Eda, landlocked in the shipyards of Istanbul.

Ali spends his time in shipyards, working with his father with whom he doesn’t get along with. At every chance he has, he drifts towards thoughts and signs that will guide him to a happier life.

One night, Ali climbs up a billboard scaffold, and sees a half-finished graffiti mural of a ship on the side of an abandoned building. Upon meeting its creator, Eda, he is certain she will accompany him to faraway lands.

Together, Ali, a restless romantic, and artist Eda embark on a quixotic adventure through Turkey’s industrial port-cities, hoping to escape the suffocating routine of their daily lives by finding the ship that Ali has only seen in his dreams.

Written and directed by Elif Refig (Erkek Adam), Ferahfeza has picked up critical acclaim along its journey including:

“The shipyards and harbors form an integral part of the film, creating an atmosphere that accentuates the dream-like quality of Ali and Eda’s relation that alternates between hope and nightmares.” – Hurriyet Daily News

The DVD edition includes Refig’s short film “Man to Be” for which she received the Hollywood Foreign Press Association Best Foreign Filmmaker Award.