Frank Sinatra – Sinatra In The Movies: The Man And His Motion Pictures 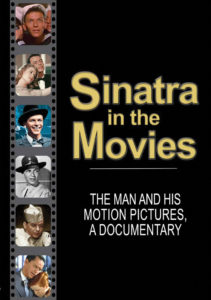 Musical Documentary on the life and movie career of Frank Sinatra with over 100 of his greatest scenes from his best films.

This new entertaining and highly educational documentary salutes the biggest recording artist of the 20th century who was also one of the top movie stars of his era. Every Sinatra fan deserves this one-hour tribute to his stellar film career. Included are selections from over 20 of Frank Sinatra’s most acclaimed films with over 100 movie scenes, Sinatra at the Oscars, his film debut, first radio show, and of course lots of big band music and jazzy jazz.

You will be treated to the man performing his signature lyrics, from the first rendition of New York, New York, All the Way, The Lady is a Tramp, Chicago, and other toe-tapping, snap-your-fingers tunes that defined the Chairman of the Board and what cool was in the 20th century. 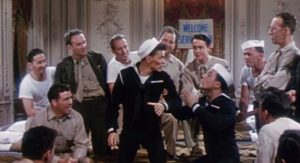 stars of his era.  The magic of Sinatra, his music and the movie characters that enchanted audiences is all here in this wonderful hour of entertainment.

Relive selections from his greatest rolls from his musicals, thrillers, gangster movies, and heart-warming romantic comedies include:

Relive selections from his greatest rolls from his musicals, thrillers, gangster movies, and heart-warming romantic comedies: Anchors Aweigh, The Detective, From Here to Eternity, Guys and Dolls, High Society, Higher & Higher, It Happened in Brooklyn, Joker is Wild, Lady in Cement, Man with the Golden Arm, Manchurian Candidate, Ocean’s 11, On the Town, Pal Joey, Robin and the Seven Hoods, Ship Ahoy, Suddenly, Take Me Out to the Ballgame,Tony Rome, Von Ryan’s Express…

It’s not just Sinatra, it’s the best of Sinatra and it might be the most entertaining hour you’ve ever witnessed on film.