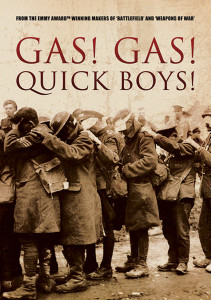 This powerful documentary explains how technology led to a weapon of such nauseating inhumanity used extensively in WWl.

“Gas! GAS! Quick, boys! – An ecstasy of fumbling, Fitting the clumsy helmets just in time; But someone still was yelling out and stumbling, And flound’ring like a man in fire or lime … Dim, through the misty panes and thick green light, As under a green sea, I saw him drowning. In all my dreams, before my helpless sight, He plunges at me, guttering, choking, drowning.” – Wilfred Owen, “Dulce et Decorum est”, 1917.

When Wilfred Owen wrote his chilling poem ‘Dulce Et Decorum Est’, the Great War was still in progress. He had been on the front lines and had witnessed the awful sight of men being torn apart by shell fire. He had seen colleagues maimed in the most horrible ways imaginable by flying shrapnel or crippled by bullets. But, despite all he had seen and witnessed of the terrible effects of the conventional weapons of the Great War, Wilfred Owen homed in on the use of gas as an inhuman weapon of war, and the slow agonizing death it brought with it has become a metaphor for the sheer waste and futility of the Great War.

Chlorine gas works its slow and agonizing way to death by destroying tissue in the lungs through the formation of hydrochloric acid produced by the gas interacting with the water found in the lungs. Owen encapsulated the ignoble nature of being choked to death by one’s own ‘froth corrupted lungs’ as he watched helplessly while a colleague died before his eyes and he realized that it was not fit and proper to die for your country in this awful way, it was in fact futile, debased, agonizing and lonely. It was also a war crime , as the use of asphyxiating gas violated the 1899 Hague Declaration and the 1907 Hague Convention on Land Warfare, which prohibited the use of “poison or poisoned weapons” in warfare.

This powerful documentary explains how the march of technology led to a weapon of such nauseating inhumanity that even Adolf Hitler would not allow its use during the Second World War.

Public Performance and Digital Site Licenses are available exclusively through Soundview Media Partners. For more information or to place an order, write to info@soundviewmediapartners.com or simply choose from the License Options below: