GEORGE CRUMB: VOICE OF THE WHALE 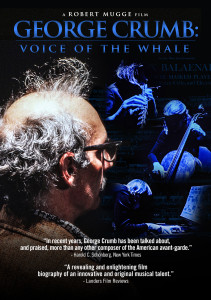 Robert Mugge’s 1976 film GEORGE CRUMB: VOICE OF THE WHALE is a portrait of the brilliant American composer George Crumb and includes a complete performance of his hauntingly beautiful composition “Vox Balaenae for Three Masked Players” which is conducted by Richard Wernick and performed by his Penn Contemporary Players: Barbara Haffner, Carole Morgan and Lambert Orkis.

“George Crumb has been talked about, and praised, more than any other composer of the American avant-garde.” – New York Times

Most of the film was shot in black and white, with musical performance sections tinted blue and sections concerning Mr. Crumb’s life (including interviews with him, his musician wife Elizabeth May Brown, and fellow composer Richard Wernick) tinted green. This clip features the opening of the film.

The film was funded by a grant from the National Endowment for the Arts and makes innovative use of color and a dialectical structure to reveal Crumb’s life (green-tinted-footage), his work (blue-tinted footage, and connections between the two (full-color footage).

Included in the film are a performance of Crumb’s 1971 composition, “Vox Balaenae for Three Masked Players”; samples of the rural, West Virginia gospel music that has influenced him; demonstrations by Crumb of exotic instruments and unusual effects that figure in his compositions; and scenes from his home and university teaching environments.

“As the environmental movement took hold in the late 1960s and early 1970s, and “save the whales” became more than just a bumper sticker, George Crumb’s groundbreaking Vox Balaenae provided a distinct musical voice to this cause while creating a richly vivid landscape (or seascape) of sound and texture. Crumb puts the contemporary relationship between man and whale on a much broader scale, painting a picture that encapsulates the vast spans of history that predate man’s interaction with the sea and its inhabitants before introducing the inevitable conflict. This chronological musical journey touches upon elements of science, history, religion and existential philosophy, as well various moral and ethical questions.” – Musiac

At his home, Crumb discusses his compositional techniques with fellow composer Richard Wernick, and his musician wife Elizabeth discusses their life together; at the university, Wernick’s Penn Contemporary players (Carole Morgan, Lambert Orkis, and Barbara Haffner) perform “Vox Balaenae.” Words frequently used to describe George Crumb’s work are “poetic, atmospheric, mysterious, evocative.” He himself has said, “I feel intuitively that music must have been the first cell from which language, science, and religion originated.”

GEORGE CRUMB: VOICE OF THE WHALE was first broadcast over PBS on June 6, 1978. Transferred to HD from the original 16mm film and lovingly restored.

“A revealing and enlightening film biography of an innovative and original musical talent.” – Landers Film Review