Get Thrashed! Story of Thrash Metal 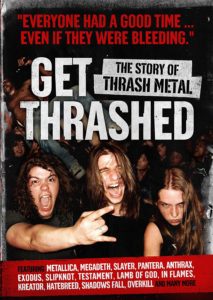 Featuring the biggest bands in heavy metal music, Get Thrashed! covers the origins, cultural impact, and musical influence of Thrash Metal. Told first-hand by the members of bands like Metallica, Slayer, and Anthrax, as well as using raw, original show footage.  With special features including bands from around the world, over 3 hours of content.

“Has managed to capture the spirit of a metal phenomenon” – Exodus

“Offers a glimpse at a vibrant, sometimes violent, subculture that for a moment in time appeared ready to take over the world” – Revolver Magazine

The GET THRASHED journey begins in the early 80s, where Metallica and several other bands laid the groundwork for what would become a lasting impression on the face of heavy metal music. These bands helped ignite local scenes in Los Angeles, the Bay area of Northern California and New York City, which helped fuel a worldwide thrash metal movement. By the dawn of the 1990’s, thrash bands 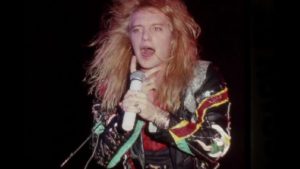 had gone from playing backyard BBQ parties to headlining arenas and Metallica were on their way to becoming one of the biggest metal acts of all time. But as legions of headbanging, stage diving and moshing metalheads were flocking to see their favorite bands, the tides had begun to change. In the early 1990’s, an evolving musical landscape sent thrash spiraling back into the underground. Some bands broke up, some artists returned to their day jobs and some passed away. While the music lived on, the scene was forever changed.

Get Thrashed: The Story of Thrash Metal is the award winning documentary film which traces the rise, fall and impact of thrash metal; from its early years, through its influence on grunge, nu metal and today’s heavy metal scene. It is the story of the heaviest, hardest music of the 80s and early 90s as told by the bands that lived it, the fans and bands that grew up on it and by the artists that carry the “thrash metal” flag today.
Get Thrashed throws new light on an overlooked, yet incredible music scene and how it  went from a simple rumbling in the underground to a loud, obnoxious roar in the (almost) mainstream. 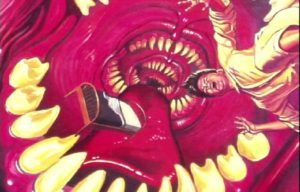 “Director Rick Ernst, in his first and, to date, only feature, divides the documentary into clear categories, beginning with the most influential thrash bands (Metallica, Megadeth, Exodus), then mixing things up with segments on the scenes (Bay Area, New York, Germany, Los Angeles), the fans, the dress code, even the distinctions between “nu” (Limp Bizkit, Korn) and “new” (Lamb of God, Killswitch Engage) metal. Ernst does a nice job of laying out the origins of thrash, how its sound was crafted, the extent of its popularity, and when it made the loudest impact. The film’s biggest strength, though, is its breadth of sources. Some genre docs suffer according to whom they didn’t get, but Get Thrashed showcases just about every figure, prominent or not, you could wish to hear from.” – Music FilmWeb

“There has been such a massive amount written about “Get Thrashed: The Story of Thrash Metal” — and the critical reaction has pretty much been raving across the board – that it almost seems anti-climatic to talk about the recent DVD release. On the other hand, the scores of folks who didn’t have the pleasure of seeing the film, now get the chance to own the DVD, one that is not only essential for any fan of metal, but also an 11th commandment for thrash denizens. As for my take on the DVD, I find the documentary as stupendous as the rest of the critical world. In countless ways, what really makes “Get Thrashed: The Story of Thrash Metal” so engrossing is the way it makes the viewer feel. Writer/director Rick Ernst has pieced it together with so many vintage — often black and white photos — and gritty live videos that one is transported back to 1985 to absorb ever sweat-drenched and bloody ounce of energy that permeated the scene. For those of us that were around when it happened, the accounts are strikingly accurate and the mood conveyed 100 percent genuine. The excitement of a style carved out of punk’s speed and heavy metal’s muscle is captured in tales told by the numerous scene veterans (Gary Holt, Kirk Hammett, Katon W. De Pena, Bobby “Blitz” Ellsworth, Lars Ulrich, Scott Ian, Mille Petrozza, etc), new school luminaries like MERCILESS DEATH, modern metal stalwarts such as SHADOWS FALL, and critics like Ian Christe. From the pit violence, to the denim-and-leather fashion, to the explosive scene pockets (L.A., New York, Europe, etc), to the pinnacle Clash of the Titans tour event, to the blistering music, the DVD is a sure bet to send viewers running for their vinyl collections.” – Blabbermouth

EXTENSIVE BONUS MATERIAL ON THE DVD: While impossible to cover  every band or moment of ‘thrash” history, director Ernst gets around it with bonus materials that covers near everyone else, albeit in briefer segments. To name just a handful: TESTAMENT, VIO-LENCE, FORBIDDEN, HEATHEN, DARK ANGEL, POSSESSED, HIRAX, VOIVOD, SODOM, AGENT STEEL, OVERKILL, NUCLEAR ASSAULT, WHIPLASH, HALLOWS EVE, and ANVIL. The bonus segments also includes examinations of scenes from other parts of the world, such as Canada and Germany. Director’s commentary rounds out the extras.

Written and Directed by Rick Ernst.