Giving Up The Ghosts: Closing Time At Doc’s Music Hall 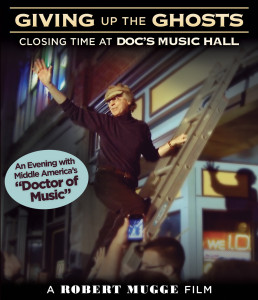 Robert Mugge’s feature-length music documentary, GIVING UP THE GHOSTS: Closing Time at Doc’s Music Hall, explores the twin careers of respected physician and musician Dr. John Peterson and the music and arts venue he owned and helped operate in downtown Muncie, Indiana from 1992 to 2012.

The film centers around a final music hall concert by Doc and his house band performing Doc’s original songs along with covers of assorted jazz (Shadowfax), rock (The Doors, The Animals), soul (The Temptations, The Isley Brothers), and pop (Paul Simon, Lionel Richie, Judy Garland) favorites.

In interviews, Doc and others discuss his early success in the music business, his later innovative merging of traditional and alternative medicines, and his purchase and restoration of a downtown Muncie building both to provide an outlet for the work of young artists and musicians and to help invigorate Muncie’s abandoned downtown.

The film also includes discussion of the ghosts many claim to have seen and heard in the building over the years (presumed to be deceased actors who performed in the city’s multiple theaters during earlier decades) and a ceremony intended to “free” them, now that the venue was shutting down.