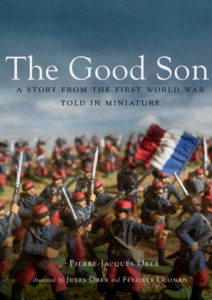 The Good Son is a story from the First World War told in miniature.

Narrated by Simon Prebble (The Six Wives of Henry VIII) and Produced by Ryan Swenar (Parkland: Inside Building 12) and Andy T. Jones (Saving Fiona), the film was illustrated by Jules Ober and Felicity Coonan (The Lego Movie).

Uniquely produced in miniatures, The Good Son provides fuel for thought across a broad range of issues while detailing the story of one man in a dire situation. The Good Son’s production style is both simple and complex simultaneously and offers insight into how storytelling can be distinctively visualized.

It is Christmastime, 1914, and The First World War rages. A young French soldier named Pierre who had quietly left his regiment to visit his family for two days is imprisoned upon his return.

Now he faces execution for desertion.

As Pierre waits in isolation, he meditates and ponders upon big questions. Included among them are: