“This propulsively single-minded attack on climatechange deniers by Craig Scott Rosebraugh may just be the feel-good documentary of the year.” – New York Times 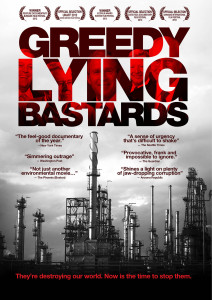 “An entertaining expose of the industry-paid deniers and how they continue to muddle the climate-change ‘debate.’” – Salt Lake Tribune

“According to this documentary by filmmaker and activist Craig Rosebraugh, climate change has been anticipated for at least a couple of generations. In fact, segments from a 1950s educational video here predict much of what has come to pass, including melting ice caps, extreme weather phenomena, and out-of-control wildfires. That vintage excerpt also suggests the underlying reasons: namely, the unrelenting exploitation of fossil fuels. Greedy Lying Bastards asks a pivotal question: if we knew this was coming, why didn’t we try to prevent it? Rosebraugh looks at decades of successful efforts by the oil and gas industries to shape public opinion and lead government policy away from the acceptance of climate change as a growing reality, denying everything while hiring legions of skeptics to testify that nothing is wrong. Entire careers in denial have been crafted, some of them bordering on the cartoonish, such as that of conservative British pundit Christopher Monckton, who denies global warming at every opportunity. Besides explaining how a concerted push by big business (including massive donations to the campaigns of key elected U.S. representatives) has won the day so far, the documentary also provides ample evidence of the ongoing destructive processes at work in the Arctic, in the drought- and fire-plagued U.S. West, and in the shifting everyday weather patterns across the globe. Climate change isn’t just “coming,” we’re reminded, it’s already here. RECOMMENDED.” – T. Keogh, Video Librarian

Hurricanes, wild fires, droughts, windstorms, floods…Climate change is no longer a prediction for the future, but a startling reality of today. The Pentagon believes it to be a matter of national and international security. Yet, as the evidence of our changing climate mounts and the scientific consensus proves a human causation, there continues to be no political action to thwart the warming of our planet.

GREEDY LYING BASTARDS investigates the reason behind stalled efforts to tackle climate change despite consensus in the scientific community that it is not only a reality but also a growing problem that is placing us on the brink of disaster. The film details the people and organizations casting doubt on climate science and claims that greenhouse gases are not affected by human behavior.

In GREEDY LYING BASTARDS, filmmaker and political activist Craig Rosebraugh, in association with Executive Producer Daryl Hannah, exposes the impact of an industry that has continually put profits before people, waged a campaign of lies designed to thwart measures to combat climate change, used its clout to minimize infringing regulations and undermined the political process in the U.S. and abroad.

94 minutes plus bonus on 1 disc

Public Performance and Digital Site Licenses are available exclusively through Soundview Media Partners. To inquire or to place an order, write to info@soundviewmediapartners.com or select from the options below