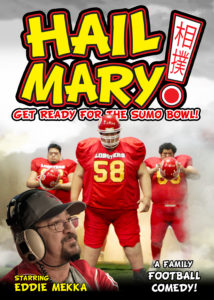 A family film with an inspirational message that presents its story through a unique, modern production style.

GET READY FOR THE SUMO BOWL!

There has never been a football team like the Portland Lobsters. There will never be one again!

HAIL MARY! is a Family Football Comedy Feature Both On and Off the Field! The film’s hysterically inspirational story-line is a simple one:

Quarterback Caleb O’Rourke is fantastic, but The Lobsters’ front line is terrible. O’Rourke can’t get a pass off… ever.

In an act of total desperation, the coach of The Lobsters, a pro football team that has now lost 32 games in a row, travels to Japan to buy a school of sumo wrestlers. His intention? To bring the humongous wrestlers back to Maine to replace his inept offensive line.

What happens next is the stuff of legend…

Hail Mary! is unusually produced with a

The football sequences were filmed on green-screen and back-dropped into the Buffalo Bills Ralph Wilson Stadium, Sumo cheerleaders and all!

“A killer idea here. First, it’s fun, crazy, fantastical energy. It reminds me a bit of ‘Shaolin Soccer’, which I loved. This world isn’t constrained by the rules that govern ours. Their sports prowess is so great as to transcend the boundaries of physics…love the wild energy and the image of the sumo wrestlers on the football field…”– Colin Theys, Film Director “The Murder Pact”, “Alien Opponent”.

The DVD version includes bonus material including a teaser for the upcoming Comic Book Series, the original movie trailer and an audio file of The Acorn Song, a traditional Japanese classic that includes on-screen lyrics.

Of special note for trivia enthusiasts: Based on market research, the title Hail Mary! replaced the original film title which of Sushi Tushi.

In-home/personal use copies of the DVD are available on Amazon:https://amzn.to/2HTZZfy. Avail to stream or download from Amazon: https://amzn.to/311A5vH as well as on Vimeo: https://vimeo.com/ondemand/hailmary/345710496

Hail Mary! Get Ready for the Sumo Bowl! from Sushi Tushi on Vimeo. 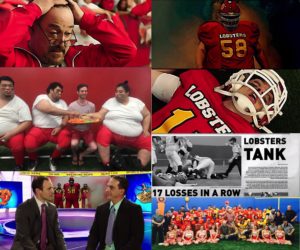