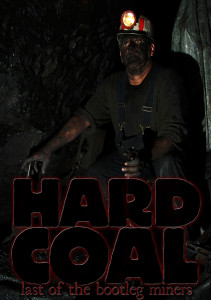 Feature documentary about the last twelve independent coal miners in the United States.

A fatal mining accident in the hills of Pennsylvania, the subsequent suicide of the mine’s owner, and the forced abandonment of eight of the last 12 surviving anthracite mines in the United States. These are the plagues that have defined the once proud and prosperous tradition of anthracite coal mining. They are also the tragedies that have prompted the feature documentary film, Hard Coal: Last of the Bootleg Miners.

These family-owned mines, which were built by hand generations ago, had fallen into near extinction. The miners interviewed have provided ample evidence that the federal government, through the Mine Safety and Health Administration (MSHA), is orchestrating a deliberate crusade to push these “mom-and-pop” mines out of business so that multi-national energy corporations can appropriate the miners’ land.

Although it was mine owner Pete Shingara who told the cameras in 2005, “(The government) won’t take me out of here in handcuffs. They’ll take me out in a coffin,” it was his friend, mine owner David (Stu) Himmelberger, who executed that promise after his friend and employee, Dale Reightler, was accidentally killed at work in October 2006.

“Hard Coal: Last of the Bootleg Miners” explores the near eradication of this group of hard-working Americans who merely wish, as their fathers and grandfathers before them, to provide for their families while helping their country develop a sustainable energy policy.