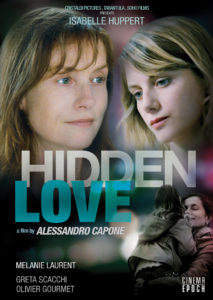 Acclaimed actress Isabelle Huppert stars in this downbeat tale of a suicidal mental patient trapped in an endless maze of despair following the death of her only child.

Initially raised in an acrid household, later locked into a dicey marriage, and ultimately saddled with a daughter she never wanted, Danielle attempts to take her own life multiple times before doctors are left with no other choice than to lock her away for the sake of her own safety. Not even sympathetic psychiatrist Dr. Neilson (Greta Scacchi) seems able to break through to the stoic patient whose hollow gaze that hints that any hope for salvation has long been lost.

“Isabelle Huppert once again reaffirms her status as one of the world’s greatest actresses; the

film has many pleasures to offer, but her performance as a mother devastated by her own apparent inability to feel is chief among them, and would in itself be good cause to seek this one out and give it a look. Recommended. – DVD Talk

“…a movie that knows exactly who it is about” – Roger Ebert

“The image of suicidal Danielle (Huppert), seated in the office of caring shrink Dr. Nielsen (Greta Scacchi), is that of a woman who has stared down the dark, deep hole of her own demise and psychic defeat. It is yet another reminder that there is arguably no other thesp in world cinema who dares push her characters to such radical limits while remaining resolutely human.” – Variety