Hit & Stay: A History of Faith and Resistance 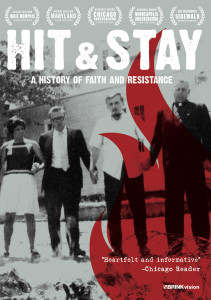 “The amazing story of radical priests, nuns, and everyday people who risked prison and took on the government to end the Vietnam War.” – Cinema Politica

On May 17, 1968, nine Catholic activists entered a Selective Service office in suburban Catonsville, Maryland, dragged stacks of Draft Board records out into the parking lot, and set them on fire with homemade napalm. They then prayed, and waited to be arrested. In doing so, they kindled a wave of similar protests against the Vietnam War across the country that swept up dozens of participants and inspired thousands, and then millions. HIT & STAY, a documentary film by Joe Tropea and Skizz Cyzyk tells the story of the Nine and those who joined them in protesting the war.

“Hit & Stay is a reminder of the power of the people, something that must never be forgotten” – Film Threat

The Catonsville Nine action had been preceded by a quartet of activists–including Catonsville Nine participant, Father Philip Berrigan–splashing blood on draft files in nearby Baltimore. But it was Catonsville that galvanized the nonviolent antiwar resistance away from protest marches and toward direct actions by ordinary citizens against draft boards. This new form of protest quickly spread to similar actions in Washington, D.C., New York, Milwaukee, and all across the country, drawing the attention of the Federal Bureau of Investigation as well as the increasingly antiwar American public.

Through interviews with many of the participants (as well as observers ranging from linguist political critic Noam Chomsky to historian Howard Zinn), HIT & STAY explores the early actions, the activists going to prison or going underground, the FBI’s pushback against the movement, the escalating scale and stakes, and the ultimate victory of the protesters in the trial of the Camden 28.

“Heartfelt and informative, this historical documentary considers the role of civil disobedience in the anti-Vietnam War movement. The movie valorizes the Catholic Left for its rock-solid convictions as well as its publicized actions, concluding that contemporary activists can learn a lot from its example” – Chicago Reader

“This movie should be played in ever history classroom in America and everyone under the age of 40 should watch it too.” – Alex Cragun, Slug Magazine

We invite you to watch the trailer: