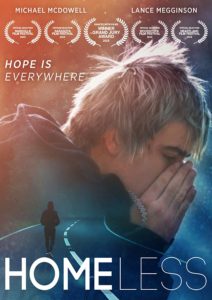 Filmed in a real shelter with real homeless people, Homeless tells the story of Gosh, a teenage boy lost in the bleak routine of life in a shelter. Every day, from sunup until sundown, Gosh is put out on the streets, unable to return to the shelter until 7pm. During the day, he seeks refuge from the cold in the downtown public library and a local coffee shop. He feels alone and anonymous in a seemingly connected world.

Weeks go by and the long days and sleepless nights begin to wear on him, and he becomes increasingly discouraged when he finds it almost impossible to find a job with the shelter as his address. But suddenly his circumstances change for the better, and he finds himself adapting to a new home and new friends and looking forward to a future that he hopes will last.

Starring Michael Mcdowell (Homicide Hunter: Lt. Joe Kenda), Clay Riley Hassler’s (The Planeteer) is a powerful drama about an 18 year old boy as he navigates his way through life in a shelter after the passing of his grandmother.

“Technically sound while still maintaining a DIY vibe, the filmmakers cast actual homeless people and filmed inside of an actual homeless shelter to achieve a sense of realism. As one would expect, it works phenomenally.” – Dances with Film

“North Carolina locations lend a gritty edge to a debut feature. The screenplay by Hassler and Anna Fields quietly emphasizes how crucial the kindness of strangers can be and at the same time remains keenly alert to the dark undertow of economic desperation.” – Hollywood Reporter