In His Own Home 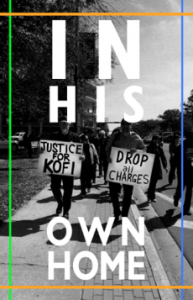 IN HIS OWN HOME is the critically acclaimed documentary about police racism and campus militarization.

Before Michael Brown and Ferguson, Missouri, the headline-making killing of Trayvon Martin and the death of Eric Garner at the hands of New York City police officers, there was the shocking 2010 shooting of Kofi Adu Brempong, a disabled Ghanaian graduate student attacked by University of Florida campus police responding to a 911 call.

“A terrifying film, not merely for its powerful depiction of the near-fatal shooting of Kofi Adu-Brempong…but for unveiling the routine character of racist, militarized violence.” – Robin D.G. Kelley, Distinguished Professor of History, UCLA; author of Yo’Mama’s DisFunktional: Fighting the Culture Wars in Urban America

The powerful documentary, IN HIS OWN HOME, recounts the events of that fateful March day and their aftermath: we watch live video of the police attack on Kofi’s apartment; we hear accounts of those who marveled at the number of snipers “ready to shoot at any time” as they surrounded the apartment of a lone student, as well as from fellow students who attest to Kofi’s peaceful demeanor; and, we hear from police officers who explain how they felt threatened and had to shoot.  And, in the aftermath, we bear witness to the administration’s shortcomings and the students and community activists who demand justice.

Underlining an ongoing pattern of racism and police brutality, as well as the frightening “militarization” of campuses nationwide, IN HIS OWN HOME speaks to widespread and pervasive issues in our country that will, for the time being, remain among our most controversial and disconcerting.

Study guide available for download: IN HIS OWN HOME Study Guide