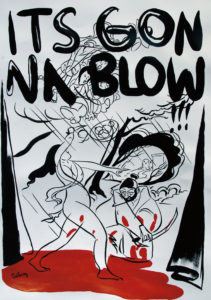 A film about community, hype, and musical incest.

“A fascinating portrait of rebellion in a conservative town.” – Beth Accomando, KPBS News

It’s Gonna Blow!!! is the story of San Diego’s legendary 1990’s music scene and its brief, ill-fated reign as the ‘next Seattle’. A motley community of musicians with a do-it-yourself ethos and an aversion to mainstream culture develop their idiosyncratic sounds in the isolation of San Diego, but soon find themselves at the center of bidding wars and expense account lunches. What happens when the outcasts become the next big thing?

If this film appeals to you, you might also be interested in ‘Salad Days: A Decade of Punk in Washington, DC‘, also available through Soundview.