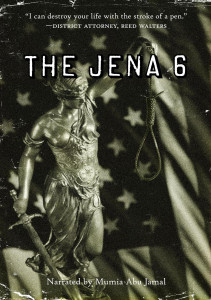 Jena – A small town in Louisiana –  six families fought for the lives of their sons.

Two nooses were left as a warning to black students trying to integrate their playground, fights broke out across town, a white man pulled a shotgun on black students, someone burned down most of the school, and the DA put six black students on trial for attempted murder. The quiet town of Jena became the site of one of the largest civil rights demonstrations in the South since the 1960s.

Narrated by Mumia Abu Jamal.
The Jena 6 is the story of hidden racial inequality and violence becoming visible. It is a powerful symbol for, and example of, how racial justice works in America—where the lynching noose has been replaced by the DAʼs pen.
The Jena 6 brings the case home in numerous interviews, strong visuals and Abu Jamal’s riveting commentary. The film is a compelling chronicle

The DVD is also a window into how working-class white folks in Jena, themselves are victims and products of the same System.

Public Performance and Digital Site Licenses are available through Soundview Media Partners. To inquire or to place an order, write to info@soundviewmediapartners.com or simply choose from the License Options below…