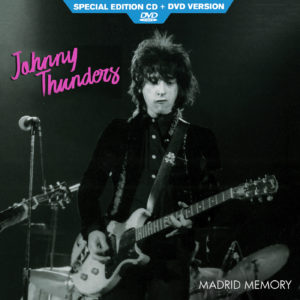 John Anthony Genzale (July 15, 1952 – April 23, 1991), better known by his stage name Johnny Thunders, was an American rock and roll/punk rock guitarist, singer and songwriter. He came to prominence in the early 1970s as a member of the New York Dolls. He later played with The Heartbreakers and as a solo artist.

Rumors surround Thunders’ death at the St. Peter House in New Orleans, Louisiana on April 23, 1991. It was stated that he died of drug-related causes, but it has long been speculated that his death was the result of foul play. According to his autobiography Lobotomy: Surviving The Ramones, Dee Dee Ramone took a call in New York City the next day from Stevie Klasson, Johnny’s rhythm guitar player. Ramone said, “They told me that Johnny had gotten mixed up with some bastards… who ripped him off for his methadone supply. They had given him LSD and then murdered him. He had gotten a pretty large supply of methadone in England, so he could travel and stay away from those creeps – the drug dealers, Thunders imitators, and losers like that.”

Filmed for TV broadcast at La Edad De Oro in Madrid, Spain, this concert captures powerful performances of songs from throughout Thunders’ amazing career including “Personality Crisis,” “Too Much Junkie Business,” “Born Too Lose”. The complete track listing of 17 songs performed:

This item is actually a DVD/CD Combo making it an even greater experience for the viewer/listener alike.