Journey of the Universe: Conversations 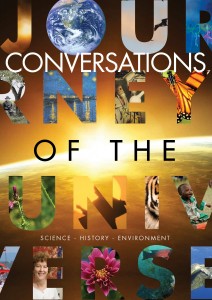 JOURNEY OF THE UNIVERSE: CONVERSATIONS is an expansive, multidisciplinary project that re-imagines the universe story and the human role in the flourishing of the Earth community. The series invites viewers to become fellow travelers on an immense journey from the beginnings of the universe, to the origins of life, to our current emergence as a planetary presence.

Hosted by Yale Senior Lecturer Mary Evelyn Tucker, the 10 hour / 20-part /4 disc series integrates the perspectives of the sciences and the humanities into a retelling of our 14 billion year story. “Conversations” with scientists, historians, and environmentalists explores the unfolding story of Earth, the universe and the role of humans in responding to our present challenges. The series contains interviews and conversations with an broad array of great minds.

“Discussing relevant matters, interviewees range from physicists Joel Primack and Todd Duncan elaborating about the Big Bang and Earth’s formation; to biologist Ursula Goodenough and anthropologist Terry Deacon illuminating the origins of life and mankind’s ascent up the species chain; to high-profile nuns Paula Gonzalez and Marya Grathwohl speaking on sustainability and trying to reform convicts with a redemptive message of cosmology. The global-warming-influenced ethical message here—i.e. that humans are interconnected with the environment and must assume responsibility as stewards—is at the heart of the Earth Charter, which aims to build a “just, sustainable, and peaceful global society in the 21st century. Recommended.” – Video Librarian

“…empowering, inspiring, and provides the preconditions of human adaptation and survival”
– Orion Magazine

Available on DVD as a 4-disc collection, the 20 subjects covered in the extensive series are listed below along with each episodes run time:

“Journey of the Universe: Conversations brings together scholars from the fields of physics, science, geology, philosophy, and religious studies to discuss a wide range of themes pertaining to the emergence of the universe, earth, life, our species, and our survival in a multi-part lecture series” – Pop Matters

Public Performance and Digital Site Licenses are available exclusively through Soundview Media Partners. To inquire or to place an order, write to info@soundviewmediapartners.com or simply select from the License Options listed below:

Buy the BOOK, Journey of the Universe on Amazon http://amzn.to/1EmDTIA