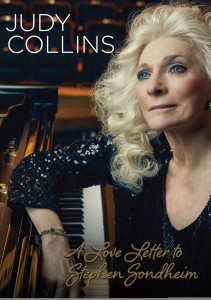 Music history would not be the same without the work of Stephen Sondheim. Included in his work, Sondheim scored A Funny Thing Happened on the Way to the Forum, Company, Follies, A Little Night Music, Sweeney Todd, Sunday in the Park with George, and Into the Woods, and he wrote the lyrics for West Side Story and Gypsy.

Music history would not be the same without the work of Judy Collins who hit the charts with such songs as Turn Turn Turn, Send in the Clowns, Hard Lovin’ Loser, Both Sides Now, Chelsea Morning just to name a few.

It was pure magic when Collins decided to perform the work of Sondheim in a live performance of love and admiration… and when directors Pierre Lamoureux and Francois Lamoureux recorded the performance, that in itself made history, too!

“A Love Letter to Stephen Sondheim” was filmed in May 2016 at The Boettcher Concert Hall in Denver, CO. Collins took the audience through Sondheim’s remarkable treasure-trove of music, interweaving stories of Broadway with her personal anecdotes.

“I have loved the songs and the shows of Stephen Sondheim since recording “Send in the Clowns” in my album Judith in 1974. My version of the great Sondheim ballad has garnered a Grammy, the top ten slot in Billboard twice in a decade, and is still played on the radio all over the world. Ever since the success of “Send in the Clowns” I have longed to sing the rest of Sondheim’s greatest songs. Now, I have the opportunity do to that. These songs glow with familiarity and inhabit the rooms and vistas of all our lives, scenes and melodies from “Little Night Music,” “Sweeney Todd,” “Sundays in the Park with George,” “Company,” “Merrily We Roll Along” and “Into the Woods.” I pray to do justice to these great songs, and to their composer, one of our National Treasures, Stephen Sondheim.” -Judy Collins’

All orchestrations are by Jonathan Tunick, who has been orchestrating Stephen Sondheim’s musicals for decades. Tunicks’s orchestration was used by Collins for “Send in the Clowns, ” and brought Sondheim his only chart topping song in his esteemed history.

Collins is joined on the program by the Greeley Philharmonic Orchestra, conducted by Glen Cortese.