The incredible story of a young man’s quest to learn the ancient art of eagle mastery results in an immersion into a culture that is a long forgotten world. 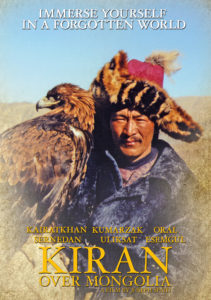 Kuma, a young Kazak man, retraces the steps of his grandfather who was formerly an eagle master, back to the remote mountainous region of his family’s origin. There, in nomadic Mongolia, he fulfills his dream of trapping and training his own eagle.

Under the tutelage of a local eagle master named Khairatkhan, Kuma learns not only the ways of hunting with eagles, but also the ways of his own people. Set against the staggering and exotic beauty of Mongolia, KIRAN immerses the viewer in a world forgotten by time.

“Kiran Over Mongolia is a visually stunning documentary that tells an almost mythic tale. The film’s visuals are unique. The vivid black- and- golden eagles and their capped and booted handlers glow in the brilliant light against a lunar background of bare mountains shaped like frozen waves, plains like a sea of rippling stone. To most urban humans, they inhabit a world as far from any modern time and space as another planet.” – Stephen J. Bodio 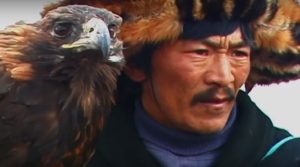