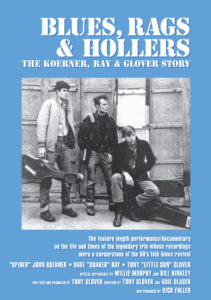 Koerner, Ray & Glover was an historically notable group of three blues musicians from Minneapolis, Minnesota: “Spider” John Koerner on guitar and vocals, Dave “Snaker” Ray on guitar and vocals, and Tony “Little Sun” Glover on harmonica. They were notable figures of the revival of folk music and blues in the 1960s.

This Tony Glover directed 1986 documentary contains performances, interviews and rare archival footage of the acoustic blues trio, as well as ’95 and ’07 chapter updates, and 9 bonus live performances from ’91-’99. It’s the story of three notable American music originals, told with characteristic wit, grit and irreverence by those who lived it.

The original film has been updated by Glover with album-by-album postscripts, 10 full-length performances, and more. It also includes special appearances by Willie Murphy and Bill Hinkley. –