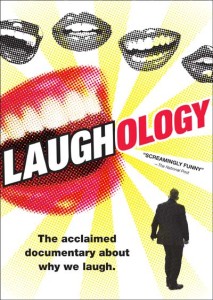 “It’s probably safe to say there really hasn’t been a film quite like this before.” – Home Media Magazine

Laughter … Plato hated it. The Bible discouraged it. The School you went to, probably, banned it.

The first ever feature documentary about the subject, LAUGHOLOGY is a “screamingly funny” groundbreaking odyssey into why we laugh and those who would stop us.

When filmmaker Albert Nerenberg realized he needed to lighten up after a family tragedy, he went on a quest to find the cure for seriousness. What followed was a journey to discover the meaning and power of laughter in a world that desperately needs a good laugh.

• Holy Laughter is where religious groups practice ecstatic forms of extreme laughter believing Jesus is laughing through them.

• Laughter Epidemics are the history of mass-induced laughter: In 1962, the country of Tanzania experienced tens of thousands of people laughing for no apparent reason. The “Laughing Epidemic” continued for months. Laughology travels to Tanzania and reveals the epidemic may never have ended.

• Laughter Parties are new social events, that have spread across the world, where people just get together to laugh themselves silly.

• The Origins of Laughter Yoga demonstrates this phenomenon and shows why it is becoming one of the world’s fastest growing health trends.