Least of These, The (Family Detention in America) 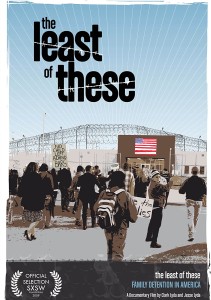 Laws and ethics surrounding immigration and imprisonment remain at the forefront of American politics.

This film explores the social and psychological impact of such policies, and it asks “to what extent Uncle Sam will punish kids for the sins of their parents, even if that sin is wanting to be an American.” (Will Coviello, BestofNewOrleans)

“A stirring peek inside one of the most divisive issues facing the country” – Peter Martin, Cinematical

THE LEAST OF THESE takes a penetrating look at the T. Don Hutto Residential Center, a former medium-security prison that re-opened in 2006 as a prototype family detention center.

The facility houses immigrant children and their parents from all over the world who are awaiting asylum hearings or deportation proceedings. As information about troubling conditions at the facility began to leak out, activist attorneys sought to investigate and address the issues. In telling the story of their quest, the film explores the role (and limits) of community and legal activism in bringing about change. The film leads viewers to consider how core American rights and values – protection of children, presumption of innocence, upholding the family structure as the basic unit of civil society, and America as a refuge of last resort – should apply to immigrants, particularly children.

Soundtrack featuring EXPLOSIONS IN THE SKY!

NOTICE ON US IMMIGRATION SITE AS IT CURRENTLY APPEARS

If you need information about a detainee that is housed at this facility, you may call (512) 218-2400 between the hours of 8 a.m. and 4 p.m. When you call, please have the individual’s biographical information ready, including first, last and hyphenated names, any aliases he or she may use, date of birth and country of birth.

Detainees cannot receive incoming calls. If you need to get in touch with a detainee to leave an urgent message, you must call (512) 218-2400 and leave the detainee’s full name, alien registration number and your name and telephone number where you can be reached. The detainee will be given your message.