LIFE AFTER DEATH PROJECT, THE 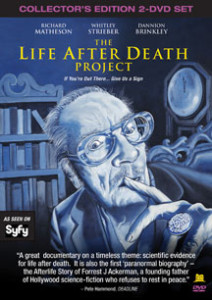 After the death of science-fiction scholar Forrest J. Ackerman at age 92, several of his close friends (including the director of this film) were astonished to receive what seemed to be messages from him from “The Other Side.” This thought-provoking film seriously considers whether Mr. Ackerman, an avowed atheist and skeptic with a mischievous sense of humor, fulfilled a promise he made to “drop a line” to friends after he died if he were to discover that life after death does exist.

The Life After Death Project tells a true story filled with anomalies, extraordinary synchronicities and events that seem to defy scientific reason — but the evidence for life after death presented in this film is new, startling and will prove convincing to many.

Skeptic magazine publisher and author Michael Shermer contributes, too. However, we are reminded that skeptics once rejected scientific theories of germs, aviation and rocketry, all of which are commonplace today. With the participation of scientists at three American Universities, plus three apparently very gifted psychic mediums as well as some very famous authors (including Richard Matheson, Whitley Strieber and Dannion Brinkley), this film highlights recent computer research on “After Death Communication” by author/professor Dr. Gary Schwartz.

“Spellbinding accounts of personal encounters with life after death from archaeologists, physicists, a retired colonel, a librarian, clinical psychologist, sales executive, publisher and doctors and nurses who have worked with hundreds of dying patients.” – Society for Psychical Research