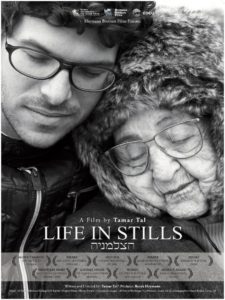 What on the surface appears to be a simple story is sometimes far more dynamic.

In Life in Stills, a photo shop owner and her grandson try to save their shop and the countless negatives stored there that document Israel’s defining moments.

Miriam, 96, never imagined that she’d be facing a new chapter in her life. But when “The Photo House” – her late husband Rudi’s life’s work – is destined for demolition, she knew she needed help. Under a cloud of family tragedy, a special relationship is forged between Miriam and her grandson, Ben, as they join forces to save the shop and its nearly one million negatives, that document Israel’s most defining moments.

Despite the generation gap and accompanying conflicts, the two embark on a heart-wrenching quest that requires love, courage, and compassion. Life in Stills, winner of numerous awards, is an exquisite visual journey and a unique chronicle of one Israeli family whose resilience parallels the resilience of the country itself.