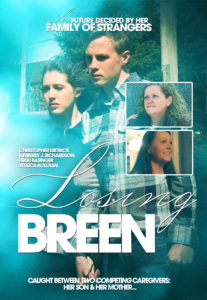 A Future Decided By Family or a Family of Strangers?

Breen was a promising Highland Dancer… until the ravages of early-onset Alzheimer’s disease set in. Now she’s caught between two competing caregivers: her son and her mother, each with their own personal trials.

Will this dysfunctional family find a way forward, or will they end up Losing Breen…and themselves in the process.

“10 Stars – This roller coaster ride poses questions about love, loyalty and sacrifice. Then challenges you to look within yourself for the answers.” – AdvLandVideo

Losing Breen has garnered some nice awards and nominations as it takes viewers inside difficult family dynamics when faced with an illness no one can truly wrap their arms around. It is a film that challenges viewers to consider how they might face a similar set of circumstances.