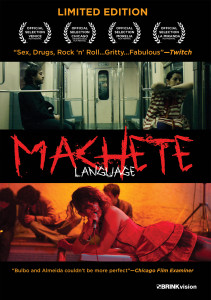 A rebellious punk rock girl and a revolutionary activist man find themselves together in Kyzza Terrazas’ directorial debut which premiered at the 68th Venice Film Festival.

Ray (Andres Almeida), a political activist, and Ramona (Jessy Bulbo), a punk singer, are furious about inequality and social injustice. Together they try to advocate for a better world. Pushed over the edge by the violent repression in Salvador Atenco, they feel increasingly drawn to commit a terrorist act in the name of their political beliefs and their love.

“Machete Language is a gritty film with a message. These are young rebels, out standing up for their beliefs. They’re trying to fix a broken system the only way they no how. Watching this movie it should come as no surprise that both Diego Luna and Gael Garcia Bernal serve as executive producers. This is exactly the type of film these two wonderful actors have been known to star in. This is the type of movie that will leave folks divided, but what can you expect? If a movie is going to take a strong political or social stance, it has no chocie but to divide.” – Dark of the Matinee