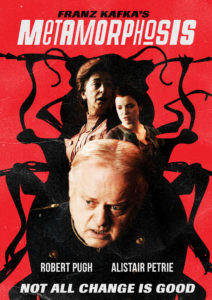 Franz Kafka (1883-1924), was a German-speaking Bohemian Jewish novelist and short-story writer. He is one of the most acclaimed writers of the Twentieth Century, and is recognized by many as a father of modern literature. Metamorphosis is one of his most iconic and enduringly popular novellas of all time.

Kafka’s work, which fuses elements of realism and the fantastic, typically features isolated protagonists facing bizarre or surrealistic predicaments and incomprehensible socio-bureaucratic powers, and has been interpreted as exploring themes of alienation, existential anxiety, guilt, and absurdity. His best known works include “Die Verwandlung” (“The Metamorphosis”), Der Process (The Trial), and Das Schloss (The Castle). The term Kafkaesque has entered the English language to describe situations like those found in his writing.

Kafka’s story Metamorphosis is the tale of Gregor Samsa, a traveling salesman, who wakes up one morning after disturbing dreams to find himself transformed in his bed into a giant insect-like creature. The story traces the interaction of Gregor and his family as he slowly starves to death for want of the right kind of sustenance. His death brings relief and rejoicing for his family, and releases them to a new, fresher, more positive and independent life without him.

Kafka’s prose is vividly visualistic in its attention to striking detail and cartoon-like grotesqueness. It presents a surreal world within a naturalistic framework, a wholly credible externalization of inner doubt, guilt, despair, self-disgust, self-pity and the laming fear of inadequacy and failure.

This 2012 British production was filmed at Halliford Studios, Shepperton by Director of Photography John Daly (Johnny English). The VFX crew, led by VFX Director William Rockall (Hangar 10), spent 18 months designing and creating Gregor Samsa in his creature form. The design of Gregor was particularly challenging as the viewer was required to maintain a level of empathy for what was described in the book effectively as a hideous vermin. CG Supervisor Simon Hodgkiss (Adventures of Orsum Island) referenced hundreds of images of real insects before a final design was settled on.