Millie and the Lords 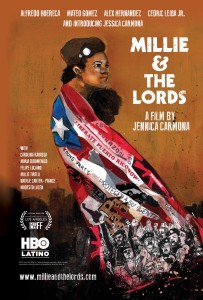 “Between the booming soundtrack and the stunning localized cinematography, the film finds an amazing voice… The educational potential in the movie is astounding” – Anderson Vision

This is the story of Milagros Baez, a Puerto Rican woman in Spanish Harlem who longs for a different life. While she spends her days and nights working at a local grocery market, she secretly fantasizes about going to college and becoming a writer. But in her world, this is not a realistic goal. With no one on her side, she is resigned to living in the projects of El Barrio for the rest of her life. With no one to believe in her, Millie doesn’t even believe in herself.

When Millie meets Mateo, a former Young Lord, her life is transformed. As he slowly shares with Millie all of his knowledge and experiences with the Puerto Rican revolutionary group,The Young Lords, she discovers an inner strength and passion that she never knew was there. Mateo’s encouragement and belief in Millie give her a new found sense of possibility, and little by little, her life begins to change. Inspired by the model of the Young Lords Party, Millie is able to overcome her fears and become the woman that she was meant to be.

Incorporating original presentations from the founding members of the Young Lords Party with a deeply emotional story written by Jennica Carmona, Millie and the Lords is an inspiring motion picture about one woman’s journey from isolation and helplessness to 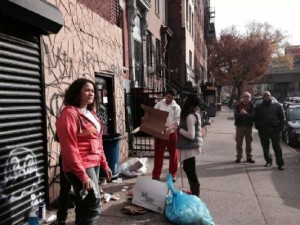 Millie and the Lords incorporates documentary material and inventive cinematography that honors the legacy of the Young Lords Party.

The Young Lords were a revolutionary political organization that formed in New York City in the summer of 1969 and whose influence rapidly spread to Puerto Rican communities throughout the country and to Puerto Rico itself.

5 REASONS WHY THIS FILM STARRING THE YOUNG LORDS WILL HAVE YOUR REVOLUTIONARY FIST IN THE AIR (Source: remezcla.com)

IN HOME/PERSONAL USE COPIES AVAILABLE ON AMAZON: http://amzn.to/2poWCEj