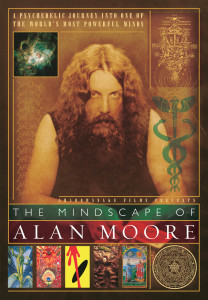 “If you aren’t careful, Moore might actually drop a theory or two into your head that just won’t go away no matter how hard you or the Illuminati try … as for this documentary, one could say Vylenz pulled the curtain back on Moore and gave us a glimpse.” – Newsarama.com

“Not many people can sustain interest for an hour and a half simply by articulating their world view. Alan Moore pulls it off. The reclusive British comic book writer behind ‘Watchmen,’ ‘V for Vendetta,’ ‘From Hell’ and other ground-breaking bleakfests, lays it all out … The two-disc package from filmmaker DeZ Vylenz focuses on Moore, who stares straight into the camera as he expounds on everything from fascism and Swamp Thing to Reagan-era politics, celebrity, surveillance, pornography and magic.” – Wired.com’s Underwire

Alan Moore writer, artist and performer is the world’s most critically acclaimed and widely admired creator of comic books and graphic novels. In “The Mindscape of Alan Moore” we see a portrait of the artist as contemporary shaman, someone with the power to transform consciousness by means of manipulating language, symbols and images. The film leads the audience through Moore’s world with the writer himself as guide, beginning with his childhood background, following the evolution of his career as he transformed the comics medium, through to his immersion in a magical worldview where science, spirituality and society are part of the same universe.