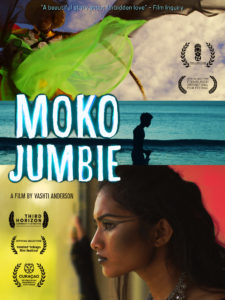 A Gothic punk Caribbean love story arises in the ruins of a coconut plantation in rural Trinidad.

“Moko Jumbie’ dabbles in powerful spiritual themes, boldly confronts class and ethnic stereotypes and seduces with beautiful visuals of Trinidad. The film reaches ambitiously toward fusing our folkloric heritage into a relatable, supernatural love story, which is admirable. The performances are solid and the trip is eventful and fun to watch.” – The Trinidad and Tobago Performing Arts Network

English girl Asha, returning to her Indo-Caribbean family home, is drawn to Roger, the Afro-Caribbean boy across the road. Her Auntie forbids their relationship, while her uncle is oddly aloof. The taboo attraction between the two teenagers grows despite family disapproval, political turmoil, a clash between cultures, and mysterious hauntings by unnaturally tall ancestral spirits.

Identity and the desire to connect with one’s roots are boldly interwoven between superstition and spirituality. 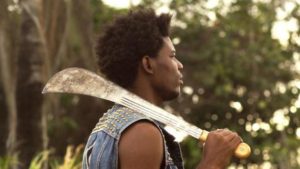 “The story finds the country’s spiritual roots, infusing the film with magic realism. I’m glad to find the introduction of these otherworldly elements. It makes an otherwise simple film fascinating” – In The Seats

“Both haunting and haunted, a palpably realised fever-dream of a film” – Caribbean Beat