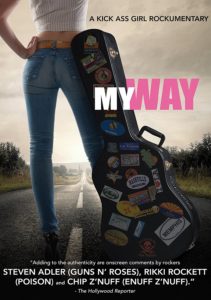 “An excellent cinematic narrative…[the film] urges us to follow our dreams no matter the cost.” – Blogcritics.org

Although Rebekah’s marriage is failing, this is not some alternate fantasy life she’s escaping to–it’s her burning passion for music that can no longer be suppressed. On her journey, she serendipitously meets and befriends rock legends Steven Adler (Guns N’ Roses) and Rikki Rockett (Poison). A witness to the power of passion and aspiration, My Way chronicles the hugely entertaining path one woman takes to pursue her seemingly impossible dream!

“With a cast that includes Ron Jeremy, Steven Adler of Guns N’ Roses, and Rikki Rockett of Poison, along with commentary by experts on gender disparity, this tale of rebelling against the norm is a brave testament to a woman who decided to take her fate into her own hands.” – Flavorpill

“This is an interesting and entertaining film. It has all the elements of adventure, sex, fun and music, and shows how focusing on your hopes and dreams can eventually become a reality if you try hard enough.” – Stagebuddy

“Most rock performers wait until they become famous before making a behind-the-scenes documentary. Not so the Rebekah Starr Band, largely comprising the eponymous lead singer and her tambourine-playing, Estonian BFF, Annika Alliksoo, whose cross-country trip to Los Angeles to perform on the legendary Sunset Strip and make a music video is 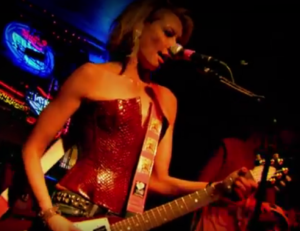 “Nothing says inspirational like a documentary featuring someone going after their dream. But when that person is a hot and talented kick ass female rock star with laser focus the ante definitely gets upped.” – Starpulse

“With Snyder-Starr producing the film, “My Way” impresses as an exercise in narcissism” – Los Angeles Times