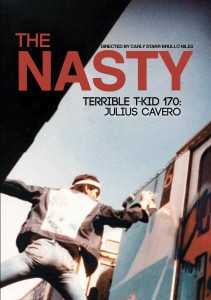 The Nasty is a documentary about a true graffiti legend who came out of the Bronx during the golden age of hip-hop.

The Nasty TERRIBLE T-KID 170: Julius Cavero, chronicles Cavero’s coming of age as a poor Latino from the Bronx in the 1970’s where a young boy named Julius would be forced into New York gang life. His canvas of choice… subway cars. Cavero channeled his anger & pain from being disregarded by society & even his family by spraying it out onto the subway cars for the public to see.

Until now the story of T-Kid 170 has been kept within the sub culture of graffiti. This film uses nearly 30 years worth of archived footage & never before seen home movies to bring insight and afford the viewer a rare glimpse into the world of subway graffiti.

You follow T-Kid into train yards all over the world, through his trials & tribulations from arrest, addiction, violence, love, and triumphs. You follow the story of one man’s rise to become a legend, and you witness the story of someone who came from the bottom to write his name on the top.

T-kid is one of few who have left their mark on the history of graffiti, coming up in the golden age of 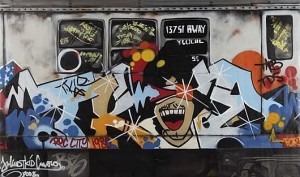 Hip Hop & becoming one of the leading figures in the emerging New York graffiti scene. His style, 3-D letters and unique characters have been a source of inspiration for many other writers from all four corners of the globe.

“The documentary contains fascinating interviews with Cavero, who comes off as a lovably brash Bronxite, and includes some thrilling actual footage of T-KID train bombing.” —Dangerous Minds

“To this day, he [Cavero] is still a style master, a pioneer of Hip Hop culture, and a significant part of the artistic heritage of the graffiti movement” – Culture Addicts